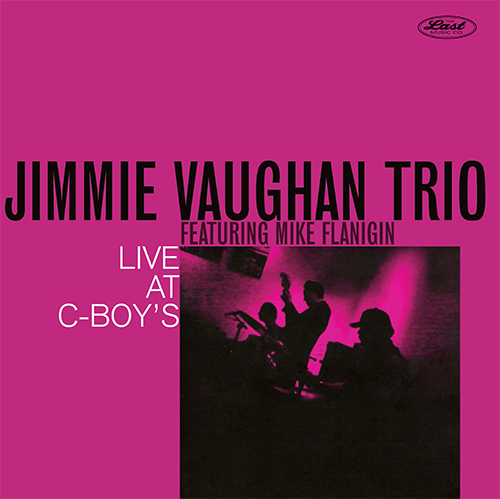 The level of musicianship is top-notch all around, from Flanigin's magnetic Baby Face Willette-style Hammond magic to Smith's thunderous drumming to Vaughan's steady-as-a-rock rhythm and lead playing....The album, Live at C-Boy's, was recorded at C-Boy’s Heart & Soul, an atmospheric club on South Congress Street in Austin, Jimmie's hometown. Both the album and the venue are dripping with late-night-club mojo. Its eight mostly instrumental songs are reminders of Vaughan's built-in ability to play in the pocket, to maintain the steady pace in a potentially all-over-the-place setting. (I'm reminded of the time my band tried to record "Robbin' Me Blind," a shuffle from 2001's Do You Get the Blues? It was a sloppy affair.) Jimmie's son, the Fender Strat-wielding Tyrone Vaughan, underscored this during a recent Guitar World interview: "Jimmie showed me how to shuffle on guitar and to be steady," he said. "He also said to have a beginning, a middle and an end to your solos." Jimmie's six-string approach is angular, raw, uncluttered and heart-felt; most importantly, it sounds as though it's straight into the amp—free of effects—which serves the album's stripped-down arrangements. Jimmie is the Ringo Starr of blues guitar: not too flashy but super steady and blessed with an incredibly distinctive, often-imitated style. It doesn't hurt that there are two (purely accidental) Ringo tie-ins on the album—covers of the Beatles' "Can't Buy Me Love" and Bruce Channel's "Hey! Baby," which Starr recorded in 1976. "Can't Buy Me Love" and the rollicking opener, the aptly titled "You Can't Sit Down" (a 1963 hit for the Dovells), find Vaughan handily filling in the bass-guitar-free gaps in an upbeat, jazzy setting. Of course, there's plenty of blues to go around; Vaughan shines on "Dirty Work at the Crossroads," "Frame for the Blues" and the swanky "Cleo's Mood," a Junior Walker tune that reads like a minor-key version of Slim Harpo's "Scratch My Back" (which Vaughan recorded with the Fabulous Thunderbirds in 1979). The spine-tingling "Saint James Infirmary" and a tight cover of Smokey Smothers' "Come On Rock Little Girl" round out the proceedings." ~ Damien Fanelli, Guitar World