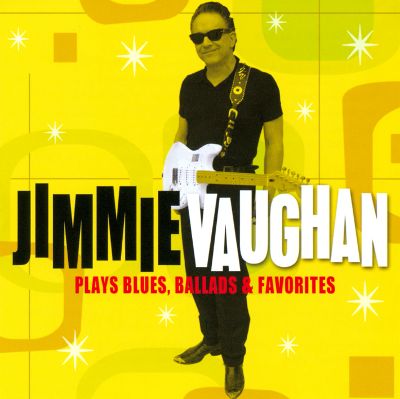 "With the Fabulous Thunderbirds, guitarist Jimmie Vaughan became one of the architects of the '70s Austin blues scene. He was, and remains, a concise stringbender whose trebly, staccato solos service the song, never extending past their natural quitting point. The guitarist's solo albums maintained that approach and even refined it, letting a few notes do the talking where others in his frontman status might have tended toward a more spotlight-stealing attack. His supporting work backing Omar Kent Dykes on two sets of Jimmy Reed covers released in 2007 and 2009 further reinforced that style and this, his first solo set in nine years -- and only his fourth overall -- continues the trend. There is just one original, the hopped-up instrumental "Comin' and Goin'," but Vaughan has dug deep to excavate cool obscurities that fit his less aggressive but crackling technique. Old friend Lou Ann Barton guests to add her sexy scotch-and-soda vocals on four of the 13 tracks, arguably the disc's highlights. Vaughan also employs horns on the majority of the selections, which brings a jazzy feel to the R&B that dominates this set. His voice won't win any awards, but Vaughan puts across the tunes with a sympathetic swagger entirely in keeping with his tasty guitar solos. He revisits the Jimmy Reed songbook once more for "Come Love," also his lone harp performance here. It's a real find and a terrific duet vehicle for him and Barton in a swinging version that makes you wonder why it hasn't been covered more often. There's plenty of jump blues such as Roy Milton's "RM Blues" and especially "(She's Got The) Blues for Sale," best known by Billy Eckstine, that allows the horns to shine while leaving room for Vaughan's jazzy guitar runs. The titular ballads also change the pace with a smooth version of Willie Nelson's "Funny How Time Slips Away" (sung by keyboardist Bill Willis), the swaggering, blues-drenched '50s standard "Wheel of Fortune," and a supercharged run-through of Little Richard's "Send Me Some Lovin'," the latter two featuring Barton's tough/tender singing. Vaughan fans will find this to be a welcome entry to his rather slim solo catalog and most blues lovers will appreciate that the guitarist's sheer comfort level and easy-rolling interpretations of these songs make him a veteran whose best days might be ahead of him." ~ Hal Horowitz, AllMusic.com